My first job in America was not really a job. I saw a bus advertisement about donating blood plasma for money and I asked myself, “I wonder if that’s safe?”

So I sent an email to Dr. Luke, the official M-CAS health consultant in New Zealand, and I immediately received a one-sentence response: “Yes, but they may stop you dpmoing it beaude you are foreign”

I searched the Internet for nearby donation centers and made a reservation online. Then I called to make sure that the donation was paid. A polite woman picked up the phone and said, “No, I’m sorry, we are a non-profit collection center. We don’t pay money, but donating is a very valuable service to our community.”

Then I asked for directions to their location—as if I was still going. As soon as the call ended, I reopened their website and canceled my appointment. Sweden is full of non-profits that will give you gratitude and a pair of socks if you donate bodily fluids. That doesn’t interest me. I am interested in something a little bit more American.

I kept searching the Internet and eventually I found a collection center that paid for donations. I called to confirm and another polite woman told me, “Yes, we pay $50 for your first and second visit.”

I then read an article in The Atlantic about blood plasma harvesting and how it has ballooned into a billion-dollar industry in post-recession America. Someone is making a lot of money by convincing poor people to donate blood plasma at these centers. The article seemed sensationalist and exaggerated, and I had already confirmed with my doctor that it was safe, so I walked downstairs and got on the bus. I changed bus lines twice and then stepped off the bus. That is when I began to understand the context of the Atlantic article. I saw boarded up houses and trash blowing across the street. I walked over big potholes in the sidewalk and passed red neon signs advertising payday loans. Then I encountered a scene so cliché and unoriginal that it will sound made up: a group of young black men appeared. One of them had a boombox on his shoulder. They were listening to rap music. They walked toward me and just as they passed me, they all looked at me and—in unison—rapped along to the aggressive (and quite generic) sentiment of their playlist. Then they all laughed rambunctiously. Again: this sounds made up. Overly choreographed. Lifted from a bad movie. But it happened. At first, I felt only exhilarated, but as the moment passed, I felt an urge to chase them down and thank them for inviting me into such an intimate and authentic American moment. I felt honored.

I kept walked and passed a few more boarded up adult toy stores. Then I finally saw it. The Grifols Blood Plasma Collection Center. I entered this dog-eared one-story building and surveyed the scene: two dozen chairs sprinkled with bored-looking, sluggish locals; a sign saying “No sleeping or eating in the waiting area”; a woman with dreadlocks sleeping under the sign; people punching information into strange ATMs along the wall; a Nurses Station populated by young Asian women with hipster glasses and white lab coats. I greeted the nurses. They asked me to to sign a binder full of waivers and paperwork. Then a young Latina in an over-sized white lab coat took my blood pressure, checked my arm for drug injection marks, drew a blood sample and measured my blood plasma levels. Everything checked out, I was told to sit down and wait. The dread-locked girl in front of me snored intermittently. Her bright red chunks of hair heaved up and down. Half an hour later I was led into a backroom where I was greeted by a pale white girl with a heavyset frame and lots of moles.

According to government regulation, these collection centers need at least one nurse on the premise at all times. This sweaty white girl is the only employee with a degree, so she works 16 hour days. If she goes home, they have to close up shop. Her eyes kept rolling up into the back of her head as she read me the fine print of the contract. Her sleep deprivation aside, I was comforted by how strictly organized the procedure seemed. For example, I had to promise five or six times that I hadn’t done intravenous drugs in the last year.

She asked a lot of questions about my background, which led into some friendly small talk. I told her that I was originally from Sweden, but that I had lived in China for the last six or seven years. I told her, “I’ve been in the US for three weeks. My wife is an American, but we met in Beijing while she was working for an education company. The we moved to a city in the south called Hangzhou, where we got married earlier this year. My wife wanted to go back to school and get a Ph.D. Now she is studying at University of Washington. That’s how I ended up here.”

The nurse was animated by my story. She said, “I’ve only been to two other states.”

Throughout our conversation, she kept repeating the words: I wish I had traveled more when I was younger.

She then told me her own story, “I have a three-year old baby and until March of last year I thought I was happily married, but then my husband told me that he was in love with another woman. My life has been a complete mess ever since. I hate this job and I quit a few years ago, but they called me back last month and offered me even more money. Raising a child very expensive and I couldn’t say no.”

So there she was, farming liquid gold for Big Pharma. Making bank.

I went back to the waiting room and waited another half hour. I studied the tattered walls and tugged on the wallpaper where it was coming apart. Downy insulation feathers snowed down toward the linoleum floor. The walls were plastered with inspirational posters. Keep your eyes on the stars and feet on the ground. Then, around 6pm, I was led into the heart of the center: The Plasma Farm. This hall had maybe 30 half-reclining hospital beds, arranged in two rows.

Someone asked me, “What’s the last four digits of your social?”

Less than four days had passed since I received my Social Security card in the mail, so I did not have the number memorized yet. I started riffling through my bag, looking for the card. The Americans laughed at me. They had never seen that before.

“He is new here,” offered the girl that had drawn my blood, “He just got his social.”

They gave me a detached handlebar grip from a bicycle and said, “Keep squeezing this rubber toy while the machine is drawing blood. Squeeze it hard and then release. Keep doing that. It’ll make the blood flow better.”

Then they hooked me up to the beige collection machine. This apparatus had two tubes that converged into one needle in my arm. First, the machine sucked blood out of my arm for about 5 minutes, then, after a series of clunky mechanical noises, the machine entered the separation stage. The top part, a circular plastic drum that resembled a small top-loading washing machine, started spinning. This separated the plasma from the non-plasma through centripetal forces, and then the plasma was squirted into a one liter semi-clear plastic bottle on the front of the machine. After the first cycle of spinning and separation, my bottle was approximately 20% full. 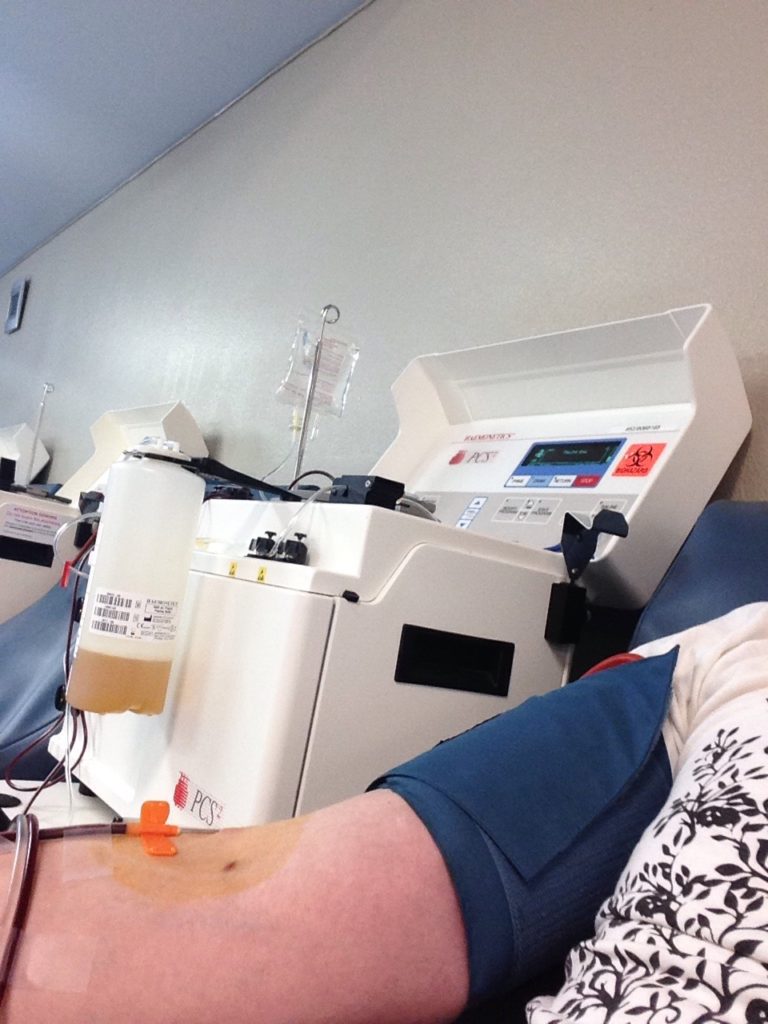 I studied the watery straw-yellow liquid and understood that I would be there for a while. Then the machine started pumping the dark plasma-drained blood back into my arm. This was uncomfortable, because the blood had cooled. I felt a strange and unnatural pressure in my arm. I noticed two small lights on the top of the machine. The RETURN light went dark. The DRAW light lit up. The machine went back to sucking blood. I watched a Star Wars movie on the overhead TV. I tried to imagine myself somewhere else. I tried to go into my meditation cave and meet my spirit animal. A penguin. Slide. I tried not to focus on my arm. Blood was drawn, separated, returned. I tried to read a magazine. Drawn. Separated. Returned. I tried to survey the room. There were a few overweight black men with huge t-shirts sitting in the row across from mine. There was a cracky-looking white man on the bed next to mine. The white guy pulled his hat down over his eyes. Someone came up to him and said, “Sir, you can’t sleep during the drawing process.”

There was a mundane sense of community in the room. Based on their small talk, most of these people were very familiar with each other. The donors knew the schedules of the girls in white lab coats. There were a lot of “How’s that thing going?” and “How’s your mom doing now?”

The guy next to me talked about the twelve hour shift he had just finished at a restuarant before coming over here. He said he needed to make ends meet, and everyone around him nodded along respectfully. This is an acceptable attitude, according to the Americans. A lab coat girl in big nerd glasses passed by my bed and pointed to my hand, “Don’t forget to squeeze your rubber toy.”

I made a fist and then released. Fist. Release. Over and over. After being hooked up to the machine for more than an hour, and about three hours after arriving at the collection center, my bottle was finally full of pale yellow goop. I was then decoupled from the machine and asked to drink a bottle of purple Gatorade. “Gatorade?” I asked, “Like in the movies?”

I was surprised to find that Gatorade isn’t carbonated. I finished the bottle and walked up to a tiny window where I exchanged an empty plastic bottle for a Grifols-brand debit card.

“This card has $50 on it,” explained the cashier behind the glass, “Only use it at Bank of America ATM. At other banks there is a $3 withdrawal fee.”

She gave me a pamphlet and said, “There is a fee for asking how much money you have left.”

I hailed an uber car and went home. A week later I received a postcard in the mail: “Donate one more time this month and win an XBOX 360!” The postcards kept coming. Free t-shirts. Free video games. Over time, the donation center faded in my memory. But years later, I still remember that car ride—and its shimmer of vague success—as a formative experience. A bright red debit card. This was not China money. This was not Sweden money. This was America money. This was Dream money. It was as if I had lived my whole life in black and white, and now I was looking down at the blood-red color of capitalism. My first $50 earned in America. My first step into my new research field: The American Dream. My story of becoming a millionaire in America in order to understand America. My first fifty. Only 999 950 dollars left until my next milestone.