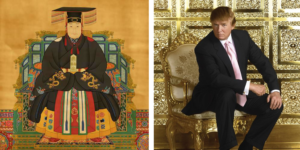 Here in America, most civilians are upset about recent events in the nation’s political life. At the M. Joakim Eriksson Center for American Decline, we try to take the long view and focus on larger trends. Therefore, we have serial connected four Intel® Core™ i7 processors and overclocked them at 14.4 GHz. Our pattern recognition algorithm, powered by this super-terminal, is running day and night trying to identify repetitive motifs in cyclical batches of historical data. Earlier today, the computer identified the following signal: President Donald Trump is the reluctant Wanli Emperor of Ming Dynasty.

The Wanli Emperor refused to attend morning meetings, see his ministers or act upon memoranda.

2. The Appointment of Officials

The Wanli Emperor refused to make necessary personnel appointments, and as a result the whole top echelon of the Ming administration became understaffed. He did, however, pay close attention to the construction of his own tomb, a magnificent structure which took decades to complete.

3. Time at the Office

The Wanli Emperor grew bored with the bickering eunuchs of the court and instead favored vacations on the Western Lake, around the area that would later house the Summer Palace.

During Japan’s invasion [of Joseon] from 1592 to 1598, the emperor sent more than 100,000 soldiers and he spent a vast amount of money for warfare, roughly equivalent to 5 years of state tax revenue. Many historians claim that this war completely destroyed the Ming’s economy and sped up the downfall of dynasty.

Conclusion: President Trump is losing the Mandate of Heaven

Throughout the millennia, China has been governed by an array of disinterested rulers, like the Huizong Emperor of Song Dynasty and the Qianlong emperor of Qing Dynasty. And they all signaled that their respective dynasties were in decline and that the dynastic cycle was about to progress to the next stage. This motif is universal and the lesson for America is clear: 2-4 presidents until barbarians cross into American territories. Perhaps they will topple the US government. Perhaps the US government will prevail. It is still too early to know. But in its short 238 year history, the American idea has never been less safe.

There are other important lessons we can draw from the lives of China’s disinterested rulers. For example, it is always a backstabbing eunuch that ultimately triggers the downfall of the ruler. Therefore, President Trump should keep an eye on his inner circle. The eunuchs are not the career civil servants that take on formal roles in the hierarchy of government. Instead, they are people from the lower classes who have desperately grasped at an opportunity. They have found a shortcut to power. They have paid a heavy personal price.

During the Ming dynasty, the Forbidden City contained a special eunuch clinic where candidates had their genitals removed while sitting on a special chair with a hole in it. Candidates that didn’t survive were carried away with their penis and testicles in a pouch for reunification in the afterlife.

Those who survive get to live in proximity to the emperor, but the genital wound never fully heals and the eunuchs are famous for their smell of urine. For us, only one question remains: