On February 8, 2016, all Chipotle restaurants across the country remained closed. Instead, all employees were requested to show up at nearby movie theaters to participate in a live-streaming event with upper management. I took an Uber to downtown and noticed streams of Chipotle workers in black t-shirts being funneled into a shopping mall. I followed the current to the fourth floor of the AMC Pacific Place and eventually found myself in a dark movie theater. The screen lit up with stock footage of bell peppers and tortillas. Then the screen faded to black and we were presented with the following message: 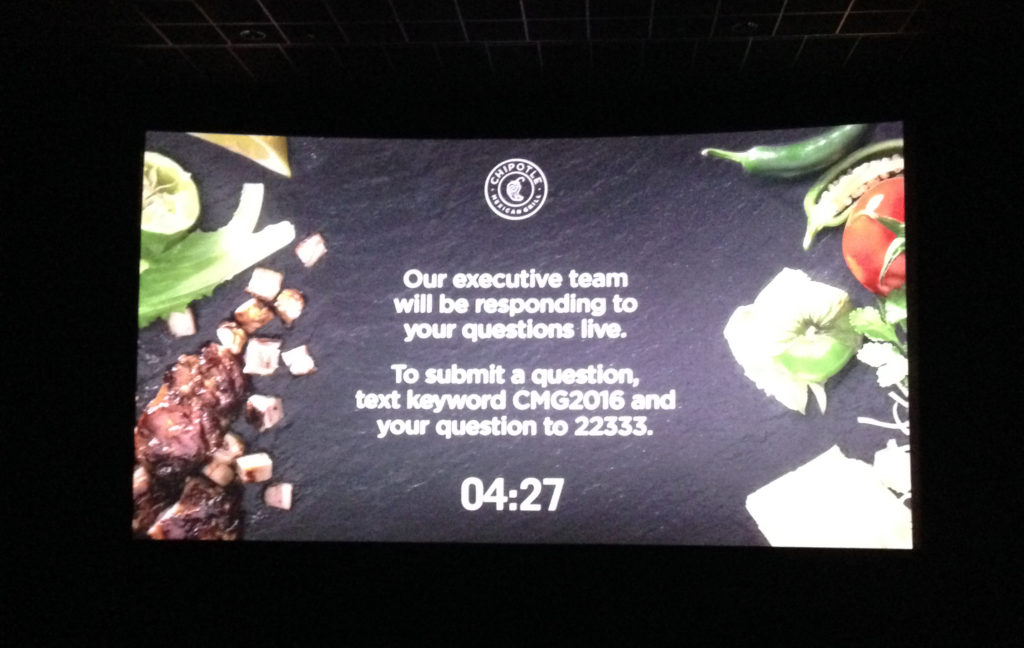 I took out my phone and submitted a question: “When someone accidentally cuts themselves while prepping food, how do we clean up blood?” I instantly received a Thank you for submitting your question.

I sent another question: “How should we clean knives safely and properly? And how often? And when do we clean the cut gloves?”

Eventually the live stream began. Overall, this was very uninteresting. Steve Ells and Montgomery Moran—key actors in the Chipotle corporation—talked about the greatness of the company and its staff and how much harder we are going to work in the future to win back the trust of our customers. Their sweaty faces struggled with the teleprompter, but not enough to make it interesting. They answered two employee-submitted questions, but not my question.

Then they showed us a prerecorded video of a person marinating meat without splashing meat juices everywhere. A voice-over explained that cross-contamination happens if you chop raw poultry and fresh vegetables on the same cutting board. The next video explained the germ theory of disease: a man sneezed into his hand, and then he shook hands with a Chipotle employee, then the Chipotle employee opened a door with that same hand, and then other employees touched that door handle. A voice-over explained that the germs were now on everyone’s hands. A last video showed young Chipotle employees talking about their dreams—playing in a rock band, becoming a professional skateboarder—and how working at Chipotle was help them achieve these dreams. Dramatic music began to build as a young Chipotle employee on the screen started crying. She explained, “I would not be alive today if it wasn’t for Chipotle. These people have saved my life. These people are my family.”

On the screen, the crying girl in the black Chipotle t-shirt was embraced by her fellow co-worker. Everyone smiled. Fade to black.

I walked out of the movie theater and found some of co-workers from my restaurant. I inquired, “What did you guys think about the video?” At first, no one said anything. Eventually someone mumbled, “Well, that last video was a little bit over the top.”