Here in America, civilians are routinely exposed to false and misleading information. Our America-based researchers are chronically exhausted from living and working in a Low-Trust Information Environment. But for the locals, this is normal. They are natural skeptics who thrive in a world of doubt. They do not mind documented cases of dishonesty (“unhealthy breakfast cereal claims to be part of a healthy breakfast”, “credit card company claims to offer exclusive deals that end soon”). Some Americans even take pride in the chaos. In the past, it has probably contributed to their success. It probably helped make them skilled critical thinkers. It gave them a knack for finding the truth—the real truth. But today, things are different. Nihilism is dissolving their common myth.

Our field research has revealed a series of patterns. To our research subjects, disbelief is so reflexive that they often disbelieve truth[1]. To live a comfortable life in America, each subject must habitually peel back layer after layer of false information. So when the subjects arrive at the layer that contains Actual Truth—muscle memory takes over—and they accidentally dismiss that layer too. This is a problem. When the subjects peel back the layer of reality that contains Actual Truth, the darkness underneath is revealed. Here, the subjects find the birther movement, the water fluoridation controversy, chem-trail paranoia, urban preppers, and a general belief in government mind control through TV broadcasts.

To help Swedish policymakers understand this arrangement, we have developed the following framework: 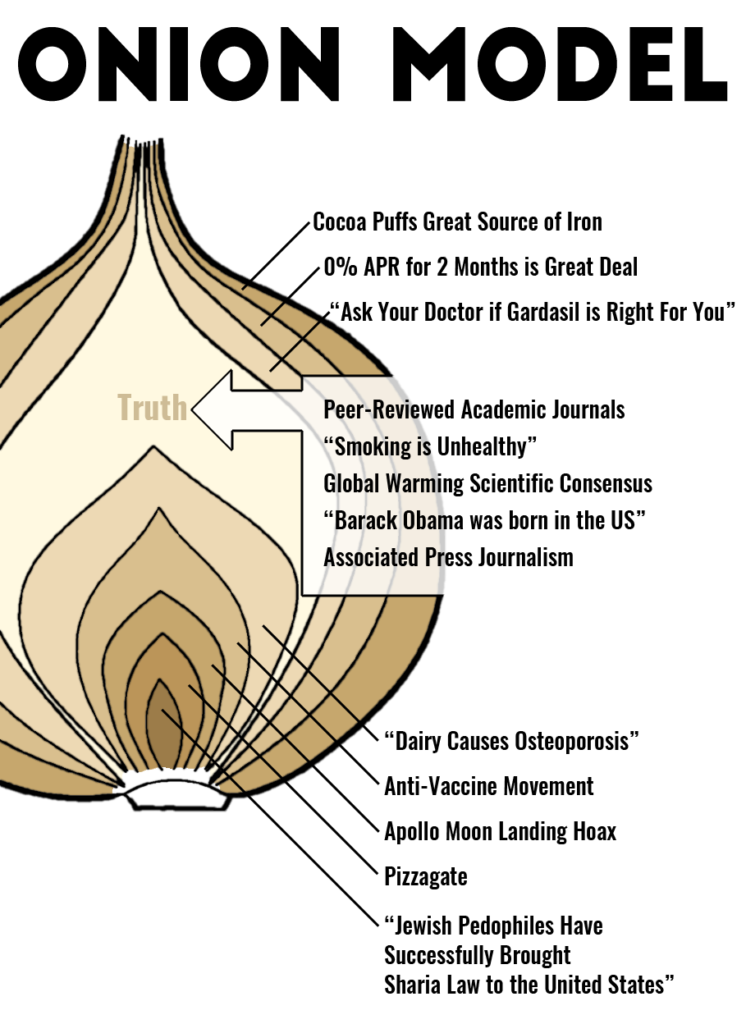 Many Americans are working hard to get to the center of the onion. In the process, they are destroying themselves and losing interest in reality. They are becoming nihilists. It is easy for us to view these Americans with condescension. They actively seek out false and hard-to-find information. Even though correct information is readily available. But an arrogant and dismissive perspective overlooks the real challenge for civilians on the ground. In America, you have to peel back the perfect number of bad layers to get to the good layer—to get to Actual Truth. If you peel back too few, you end up with crippling credit card debt. If you peel back too many, you no longer believe in basic facts about reality. It is a dangerous balancing act.

BELIEF IN CONSPIRACY THEORIES IS AN ECONOMIC ISSUE

Wealthy Americans have better access to good information. They have personal experience with the inner workings of powerful institutions. They can peek behind the curtain and see for themselves. Some things are true. Some things are not. For people on the lower rungs of the society’s ladder, good information is often hard to come by. During fieldwork interviews, a civilian woman (of low socioeconomic status) told us that she refuses to pour milk into her coffee because dairy causes osteoporosis. There is scientific consensus opposing this view[2], but she told our researchers the following:

This goes back to the 1950s and 1960s when huge dairy producers weren’t selling enough milk. They funded all that research that says dairy and calcium has health benefits. But it isn’t natural. We are not supposed to drink cow’s milk. If you study this stuff, you realize that dairy has too much protein and when that protein is digested, it makes your blood very acidic. And then, to neutralize the pH value of your blood, your body will start draining the calcium from your bones. If you drink milk, it hollows out your bones. Drink milk and you will suffer from osteoporosis later in life. Most people don’t know this stuff, but I studied this stuff. I studied kinesiology. I know about this stuff. I have done a lot of research.

This woman has a desire to study scientific concepts, but as a member of the working poor she does not trust conventional institutions. She has no personal experience with the halls of power or the outside world. In her mind, America is evil and all countries are like America. In her mind, all research at universities across the globe—Japan, South Africa, New Zealand—is controlled by Big Diary. It is one big conspiracy. There are no dissenting voices. Except for a blog called SaveOurBones.com. This is the layer of reality that she chooses to not peel back. This is what the subject believes in. We are still working on a framework to understand why a subject that pushes beyond truth suddenly decides to believe in a sub-truth layer.

In mid-2016, we interviewed an older civilian man with an unclear background. He told us the following:

If it walks like a duck, swims like a duck and quacks like a duck, then it is probably a duck. That’s how we know that President Obama is a Muslim. Now, don’t misunderstand what I’m saying, I don’t think he is a bad guy. I just don’t think he is actually in control. There are other forces at play here. There are people at the highest levels—for some reasons they are often pedophiles—and they seem to want to turn the American people Muslim. This is probably because they think a Muslim population is easier to control. You can see this all around the country. Sharia law is taking over.

Later, this man also claimed to have “studied these things”. Please note that this language is ubiquitous among Americans who have pushed beyond truth. They adopt a language that echoes conventional science.

We cannot help but think that if this man was wealthier, he could peek behind the curtain of power and discover that the government is not controlled by a race of alien lizard people.

In Sweden, civilians are less skeptical. Our information environment is more trust-worthy. Consumer protection is more advanced. State media is largely reasonable. Swedish State Television (SVT) and Swedish State Radio (SR) are institutions that 90% of Swedes trust. But it helps that our country is smaller and most people have direct or indirect experience with media and government. On the other hand, Swedes are less seasoned critical thinkers. Swedes are more gullible. Your average Swede is more prone to click a banner that announces: “Congratulations! You are our 100 000th visitor of the day!”

The situation in China is, again, different. Chinese people are forced to cope with a low-trust society of their own. But unlike Americans, the Chinese are not particularly concerned with ‘finding truth’. They have accepted that some things are true and other things are not. They have accepted that it might be impossible to know what is what. No Chinese person would ever say:

I have finally found the truth. I know what happened during the 1989 Tian’anmen Incident. The government is trying to hide the real story, but I have figured it out. I have seen it all on the Internet. My uncle is always sending me links about this stuff. He has done a lot of research on this.

[1] Some research subjects have even questioned if our Center is truly affiliated with the Foreign Ministry of the Swedish government and the Swedish Crown.

[2] When listening to her explain the “Dairy Causes Osteoporosis” myth, I immediately doubted myself and sent queries to our medical experts in New Zealand and Sweden. They responded quizzically: “Why are you asking about this conspiracy theory? Dairy does not cause osteoporosis.” What is happening to me? Why was I swayed by a research subject? Am I beginning to go local? This is why they rotate embassy staff every few years. But I have only been stationed here for a year and a half? Why is this happening?