Here in America, all members of the citizenry yield to crazy homeless people. When confronted with a bleary-eyed old man who screams unintelligible swearwords through a greasy beard, all people follow the same three rules of American etiquette:

Even society’s most dangerous-seeming elements will yield to crazy homeless people. During my field observations on public transporation, I often notice groups of committed young gang members as they commute between selling drugs and vandalizing public property. They always make a lot of noise—complimenting each other’s facial tattoos and dental jewelry—but when a crazy homeless lady steps on the bus, they suddenly fall silent. As she unpacks her laminated photos of UFOS, the gang members stare at their shoes. As the crazy bus lady waves wrinkled pictures of non-descript lens flares in their faces, they avoid eye contact. As the crazy bus lady starts yelling in an unnatural Eastern-European accent—“These are angels over a dried-up salt lake in New Mexico! Jesus is finally coming back!”—the young gang members pretend like nothing. They allow themselves to be dominated by the unknown element of the American crazy homeless person. When probed about this, they always say the same thing, “Homeless people are unpredictable. They could be dangerous. They could have a knife or a gun. You don’t want to provoke them.”

This is remarkable. Imagine if the same was true in Sweden. Imagine if our most dangerous elements yielded to our crazy homeless people. Imagine a fresh-faced young Techno Viking yielding to Stellan Hagmalm.

Our Data Analytics team plotted the results of my field observations in the following UNCW spectrum. Please note that population toughness is constant, but yielding prevalence varies. 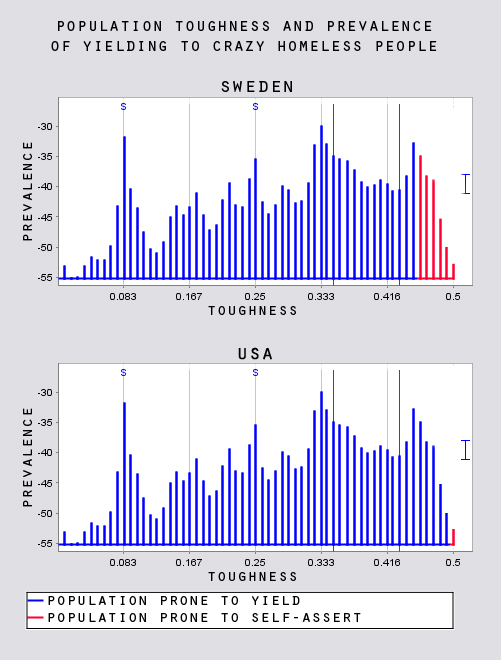 This reflexive attitude vis-à-vis homeless old men in flannel bathrobes can plausibly indicate that America is suspended in a strict “Bellum Omnium Contra Omnes”, but we need more data before we can issue a formal report.